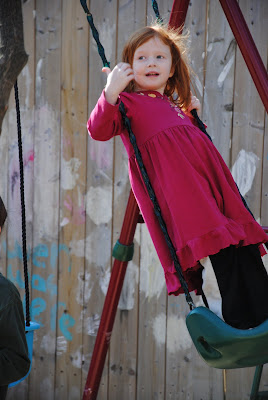 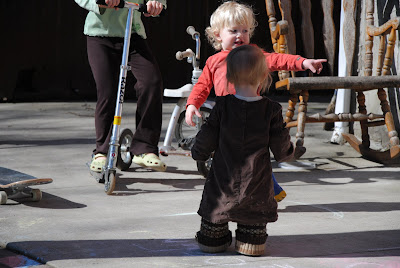 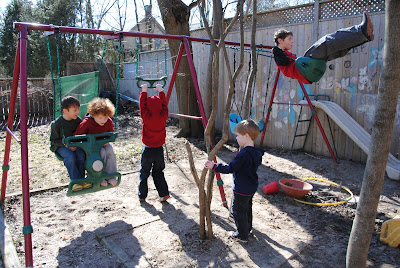 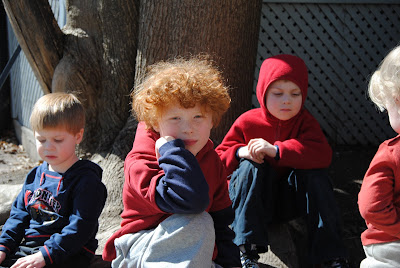 Outside. Boy did we have fun yesterday. More fun than the last photo suggests. I was trying to take yesterday’s photo for the portrait project when the kids I was babysitting booked it for the frame. They literally saw the camera, heard the beep, and booted it across the yard. And posed solemnly. My boys joined in, too. Though the girls were outside, too, only the boys were attracted to the camera. Hm.
I’m babysitting again today. I’m sure we’ll spend a portion of the day outdoors given the gorgeous sunshine. I cannot believe how weary I am at the end of these days. It makes me appreciate how much easier it is to split my day between writing and childcare; and how much easier it is to look after only one child or two children on any given day (thank heavens for public schools, say I!). I stayed up till after midnight last night, despite exhaustion, to play the piano after the kids were in bed. I find myself craving creative outlets in a way that I don’t ordinarily. Maybe it’s a good thing to crave creativity. Or, maybe it’s a good thing to satisfy those creative urges most of the time. Though I sometimes wonder whether I’m dulling the urge to write fiction/poetry/new songs by writing this blog. And the portrait project seems to scratch a connected itch, too, though it’s visual creativity rather than the rhythm of words. It’s almost like there’s a balance within my body, something I feel physically, that is sensitive both to lack or over-indulgence. I need to go inward and bring something out. But the more I’m thinking on this, I’m thinking: rarely do I get to too much. Rarely do I feel totally satiated and done for the day. That’s probably one of the gifts of my main occupation (mothering)–it keeps me wanting, needing, searching for more.
Must get focused on today’s requirements, none of which revolve around singing, playing piano, writing, or taking photos. Can I just admit … I don’t want to?
:::
CJ talked to me about his nursing experience last night. If you fear exposure to too much information on the subject, avert your eyes now. He told me that “baby nursing on a mama … baby holding a mama … mama holding a baby … baby sucking on a mama.” He also told me, when asked, that he was not a baby. He laughed and chatted, and said thoughtfully, “warm and soft.” Then he started to babble excitedly and lost track of his thoughts … “can’t remember,” he finally said, and sighed. And started directly in on a diatribe on snowpants, coat, hats, boots, and mittens. “Mittens come last,” he told me. Fooey taught him that (she learned in JK). And that was the end of the nursing chat.