“Look After Each Other!” 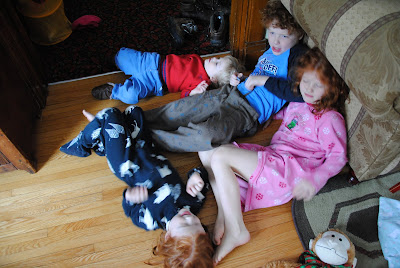 That’s what I shout at the two big kids as they head off for school on their own. There’s a kind of yah, whatever response to that phrase, but I know that they hear me, and that they do … look after each other. The time they spend together belongs only to them, and though they don’t know it yet, it’s going to matter forever. I love my own siblings. It’s a unique bond. In childhood the love and pride for each other is torn by primitive and primal feelings of jealousy and competition, and then, if we’re lucky, we grow up and out of that into a closeness that comes from having shared the same experiences, the same family, the same parental quirks. A lot of the same story. And who knows what troubles they will need to help each other through.
So I keep saying it: “Look after each other!”
:::
Hey, yesterday CJ peed on the potty. He really really did, and of his own initiative. I think it freaked him out just a little bit, but he was proud. We called Kevin so CJ could tell him himself. But he’s a long way from potty training proper … as we discovered last night during a post-bath, pre-pajama spell of random spot-peeing, which seemed always to take him by great surprise. Somehow, those important bodily signals are not translating yet. Nevertheless, I’m super-proud of him.
:::
On the siblings. One of the things I love about my children is that they take genuine joy and pride in CJ’s accomplishments (and, occasionally, in each other’s). But there’s something about that littlest that brings out the best in everyone. He can be a lot of extra work and trouble–but they all try to include him. Yesterday, Albus hurt CJ’s feelings, and was immediately filled with genuine remorse. “I’m sorry!” Big hug. “You can come and play with us, wittle bittle.” Or some baby-talk name along those lines. I’m a big baby-talker, so naturally the kids do it too. CJ has a funny thing he says often now: “Hey, ding-dong!” He also brought home the cutest craft from nursery school last week–a tiny owl, which he appears to have named “Bubbles,” and whose home is under the bathroom sink. That’s where CJ is right now–not under the bathroom sink; I mean at nursery school. I should be yoga-ing, or revelling, or even just napping. Nope. Typing. Okay, that works too. But oh the time goes by so fast.
:::
Family meeting last night was not super-exciting, but we did it. And it worked, mostly. The two youngest family members were too tired, as were the parents, but AppleApple kept things flowing. She ended by introducing a motion to have us choose special colours of clothing to wear on family meeting days (inspired by school spirit days, I think). We settled on “blue, black, red, white,” with the combination being at the discretion of the clothes wearer. She wrote it on the calendar so we won’t forget next Thursday. The other important items on the agenda: Kevin suggested using a reusable container to fetch our gelato in. And everyone agreed to keep trying to resolve conflicts using the two rules: everyone has to talk, and no yelling. AppleApple requested more parent involvement, specifically helping both parties figure out what they should say. Albus and Fooey had a genuine conflict that was genuinely resolved by compromise while the three of us were on our way home from the children’s museum on Sunday. I stopped the car and parked till they worked it out. It took some time. But it was revelatory for me too, to help them get to the root of their conflict, together. Like a lot of conflicts, each saw the problem differently. Fooey wanted to lean her head over so she could see the dials on the front dash. Albus felt that she was in his personal space. She didn’t understand the concept of personal space. So it took a lot of work. And I’m not sure either was super-happy with the solution (essentially, both had to compromise–Fooey had to lean less, and Albus had to give up a bit of personal space). But I didn’t start the car again till I was sure the fighting was over. (I should add that though that was a success story, we’ve had far more half-finished, unresolved, problematic attempts at conflict resolution all week … so I don’t want to paint an idealized portrait here).
:::
Look after each other!