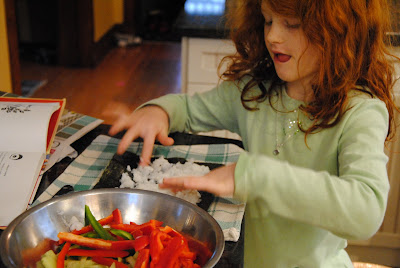 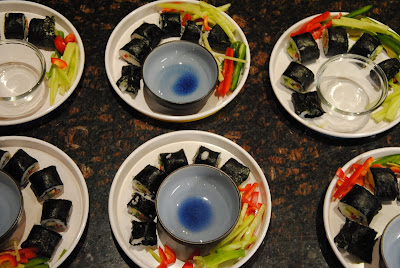 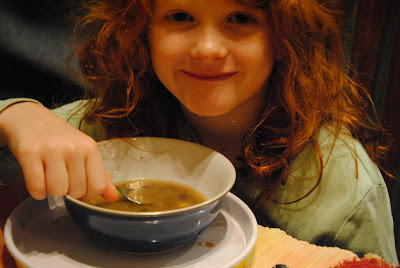 It was AppleApple’s turn to plan and help make supper this weekend. I suggested she look through Passport on a Plate, a cookbook for children that is underused in our house because it has no pretty pictures or photographs. But it does have menus from a variety of countries around the world. She listened as I read out country names (and in the case of Africa, an entire continent), and as soon as I read Japan, she said, Japan!
She chose miso soup, sushi rolls, and I added in vegetable rice because I thought the menu looked too slight (it turned out I was wrong, and we’ll be eating the completely untouched pot of vegetable rice for our supper tomorrow). I also suggested green tea ice cream for dessert (she wouldn’t have dreamed of purchasing such a luxurious treat), and we improvised with mango sorbet and Mapleton’s chai ice cream.
Today was our cooking day. I promised we’d start by 3pm. But at 3pm, I was still immersed in a self-inflicted photo organizing ordeal which I vow, as of right now, never to force upon myself (or my family) again. This past year has been our family’s most documented year EVER. And I’m beginning to question the need for so much evidence. Why this compulsion to collect the details? We have the blog, which has photos; we have a beautiful scrapbook I made online–more photos, but a creative final product; and now we have actual photographs, printed out, placed into (approximate) chronological order (definitely the most maddening task of my afternoon), and then into photo albums.
Next year, I’m going to let everyone choose his or her five favourite photos, get prints of those, and leave it at that.
Where was I? Oh, yes, 3pm, AppleApple’s buzzer went, and it was time to rouse myself and get to work. But because I have an obsessive personality, and need to finish one thing before starting another, I stayed seated at the dining-room table, butt damn near numb, and directed her to measure out the sticky rice we would need to make the rolls. The bag was apparently open. Rice everywhere. Never mind! I remained glued to the photos: “Just pick it up and put it into a one-cup measuring cup.”
Enter Kevin.”What’s going on in here?”
“Oh, some rice just spilled.”
“It’s everywhere.”
“Is it?” I couldn’t see. I was stuffing photos we didn’t need into albums. “CJ can vacuum it up,” I said. Yes, I actually said that.
“There’s a bit of extra stuff in here,” AppleApple said, at last, her cup measure full.
“What sort of stuff?”
“Like a bit of dirt and stuff.”
Okay, you’ve got my attention, kid. Limbs creaking, I rose and rinsed the rice. AppleApple vacuumed. She does it for real, and CJ does it as a hobby.
“We’re not off to the best start,” I admitted.
As the rice came to a boil, I managed to stuff the final stack of photographs into an album. I was back to the present. Praise be! Things became much more pleasant after that. AppleApple chopped red and green peppers and cucumber into matchsticks. I strained the chicken stock that had been simmering on the stove all day.
“I just read a book called Naomi’s Road [by Joy Kogawa],” AppleApple told me, out of the blue. “When I got to the end, it was still kind of sad. Why would a book end like that?”
Oh, be still my heart. She wants to talk critically about literature!
I said: “When I get to the end of a sad story, sometimes I make up another ending for it.”
“I do that too! Except it’s not a different ending, I just think about what might happen next.”
Ah, yes, exactly.
“Sometimes the author wants the story to go on in the reader’s mind. The author might not want the reader to know everything.”
“Maybe some things can’t get fixed up.”
Yah. I know.
Later, we rolled some sushi. We made it look pretty on the plates. We pretended we were running a restaurant, and everyone loved that, even our resident grump, Albus (taking over that role for today, anyway; we share; everyone takes turns). Instead of putting the pots on the table like we do most nights (classy, I know, but it makes for less dishes afterward), we served from the kitchen. We took orders. Everyone ate the miso soup! Everyone! Even fussy Fooey.
“What’s this green stuff?” “Seaweed.” “Oh.” Slurp.
Everyone had seconds. The rolls were passable, if not as awesome as the real thing. The wasabi was HOT. The rice went into the fridge for tomorrow. And we polished off a litre and a half of ice cream for bedtime snack. Pretty awesome.
Fooey’s planning to look up the recipes from China for next week. Albus wants Russia the week after. Can’t wait.

Laundry Geek
No Title Because No Time