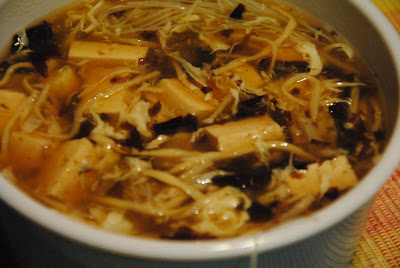 It’s been awhile since I posted a recipe, but tonight’s was good. First, AppleApple and I ran errands together, and also got supplies for this weekend’s planned mother-child supper-making. More on that tomorrow, because by the time we got home it was late (I suffered a godawful coughing fit in the camera store, escaped outdoors, stood there on the sidewalk, eyes streaming, barely breathing, and was immediately approached by two Mormons, who offered me a cough candy, which was nice of them, but honestly.) Anyway, long story short, by the time we got home it was nearing suppertime, and our planned menu was much too complicated to start up from scratch at that late hour.
Kevin and I tried out the oil of oregano I’d purchased in desperation/hope at the health food store post-coughing fit. Powerful stuff. I felt pretty good after establishing that it hadn’t killed me.
“I need a bowl of hot-and-sour soup,” said Kevin, and I said, “I think I could do that.”
I’ve never done it before. But my pantry is stocked like January in Barbara Kingsolver’s Animal, Vegetable, Miracle. On weekends, I’ve been making chicken/turkey stock, then freezing it in conveniently sized containers. Makes a great addition to many recipes.
So, the H&S soup took almost no time to whip up, just a bit of prep, because it’s more or less instant once all the ingredients have been assembled. My version is ad-libbed with guidance from the Joy of Cooking. It was good. Nay, delicious. Yet completely unappealing to children, who ate, instead, warmed up macaroni from last night’s meal with ketchup. Yes, ketchup. “Pass that stuff made out of tomatoes,” said Fooey.
Kevin and I blew our noses and devoured the soup over thin rice noodles. And we added extra hot sauce.
:::
Hot and Sour Soup
In a large pot, bring 6-8 cups of chicken stock to a simmer. Add 1/4 to 1/2 tsp of hot pepper flakes to the stock.
Meanwhile, in 1 and 1/2 cups of hot water, soak a handful of chopped dulse, or other sea vegetable (Joy of Cooking recommends dried mushrooms, but the seaweed substitutes well; use whatever you’ve got). Set aside.
In a second bowl, combine 5 tbsp cider vinegar, 3 tbsp tamari, and 1 tbsp cornstarch. Mix well. To this mixture, add half a block of chopped firm tofu (or 1 cup of shredded chicken or pork), and set aside (I topped the liquid up with boiling water to cover).
In a third bowl, combine 3 tbsp water with 3 tbsp cornstarch and mix well.
Now you’ve prepared all of your little bowls: it’s time to start putting the soup together.
Grind 1 tsp black pepper and add it to the soup.
Add the dulse and its liquid to the broth, and simmer for three minutes.
Add the cornstarch mixture to the simmering soup, and stir constantly until slightly thickened; about three minutes.
Add the tofu (or meat) mixture. Plus a small can of drained bamboo shoot sticks (totally optional; weird that these were in my cupboard; but a nice addition).
Return soup to a simmer, then stir in 1 egg, well beaten.
Remove from heat, add 1 tbsp of sesame oil (optional), and you’re ready to eat.

Something Old and Something New
Laundry Geek