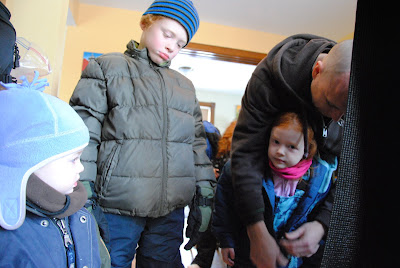 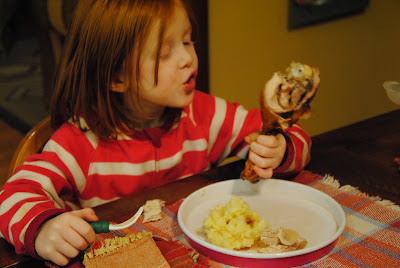 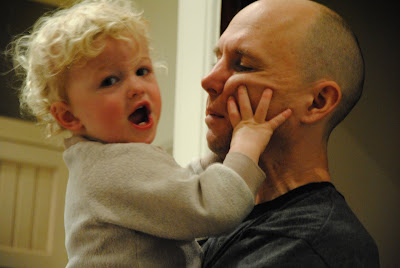 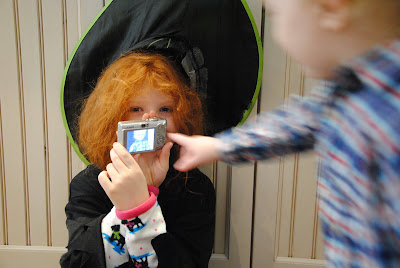 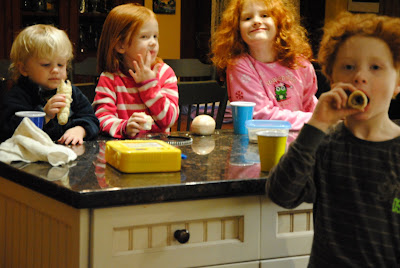 Just occurred to me that today is the last day of the month. Whoosh. There it goes. Here are some of my favourite unpublished photos from this month … AppleApple in her Hogwarts hat taking photos with my old camera (which I still use to take movies, and sometimes grab for point-and-shoot situations). Fooey eating the largest chicken drumstick you’ve ever seen in your life. That was from our meal last Sunday, which we made together. She requested gravy and mashed potatoes, and I added a roast chicken. We had meat enough for a second meal later in the week (chicken curry in the crockpot), and still have enough for cocka-leekie soup next weekend, for our Burns’ supper (which will double as a birthday party for Kevin). Who turned forty yesterday. He declared his birthday “just about perfect,” as we drove home last night from a dinner out (thanks for my brother Cliff and his fiancee Keely for babysitting–and bringing along a pottery craft for entertainment). Pause. “Just about?” I said. I hope to get a chance to blog about the birthday day. If not, at least more photos to come.
Last weekend I spent several days parenting alone, and the photo where all four kids were sitting at the breakfast bar, and Albus was using his cream horn as a megaphone, was taken on our second evening together. We were also watching the telethon for Haiti at the same time. Which brings me around to our penny jars, and our newly instituted family meetings. Kevin has devised a complicated (to everyone but him) mathematical formula for filling the (somewhat mislabelled) “movie” jar. We’ve decided that we will be saving up for family fun nights–when we reach our goal (refer to Kevin’s complicated mathematical formula), we will choose a fun activity to do together. So far, ideas include family swim night, and everyone play Lego with Albus night. Pizza night is in there somewhere too. To make the family meeting just that much more appealing, we’ve added the element of ICE CREAM. Who can resist.
For their allowance, which we’ve never given them before now, we have decided to split it into thirds: one third for saving at the bank, one third for giving, and one third for spending as they choose. We give out the allowance at the family meeting. I should add that I got some of these ideas for family meetings from a book called Honey, I Wrecked the Kids, recommended by a friend.
So. In summing up this month, I’d say that we are in a good rhythm. It’s busy, but the days and weeks have some order to them, with enough room for flexibility. Though I still struggle to find time for my own activities (even this blog), it is worth it to keep trying. I’m appreciative of moments like right now. Alone in the kitchen, four loaves of bread baking in the oven, typing out a few words.

Pickle Me This
And Then He Was ...