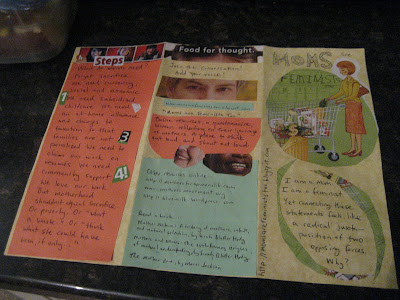 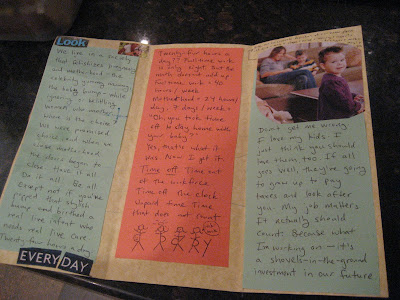 Above is the hard copy of my women’s studies project. Some of you were involved in it, having responded to my questionnaire on a separate blog created for the project, called Moms Are Feminists Too. Thanks for your participation. I continue to feel inspired to add content and thought to that blog, even though it feels like I’m formulating ideas even as I go along. The above zine was produced with a great deal of self-doubt, and I almost didn’t hand it in, despite the effort behind it. I almost handed in an alternative production that was tidy and pleasant and not very activist-y (yes–that is how much of a keener, I am–I actually completed this single project TWICE). The zine you see above was produced late at night in a fit of scissors-ing, pasting, and scrawling. The words came from the heart and were not exactly well-planned, and I lost a few marks for that, but the emotion and purpose must have come through because the prof liked it enough to keep it.
I confess that the project surprised me in a number of different ways. It surprised me that I felt this passionately about motherhood and work, and the value (or cultural undervaluing, to be more precise) of children and childcare. I was surprised by how hard it was for me to step out and declare a position. It was difficult even to declare myself a feminist, with all the negative connotations associated with that word, and because this blog, Obscure CanLit Mama, has never had much interest in politicizing family. It doesn’t seem the place for it. I wonder why not?
Here’s another tiny and rather ironic revelation that came over me on the drive home from my last class, tonight. I thought: gee, I kind of took this class to see whether my brain could still retain information and regurgitate it on command (which is what most educational testing schemes require of students). Apparently, I still can. Really, it stands to reason that I’d be much the same student now as then. So why the heck did I think my capacity to be a “good” student might have changed? Easy. Because in between the last time I was a student, and now, I gave birth to four children. Somewhere along the line, I must have bought into that theory about “motherbrain.” You know, how motherhood fuzzes our brains, how we become all leaky and exhausted and incapable of rational thought. Forever. Um. Damn! I cannot believe that some part of me actually believed that theory enough that I needed to test myself, to prove myself. Personally, I think motherbrain is probably the same as fatherbrain–caused by severe sleep deprivation, and, generally, passing post-infancy. This is just one small example of how insidious these messages are, how ever-present, how we tell them to ourselves, and pull them into ourselves, and how they have the potential to keep us from exploring wider possibilities, or pushing beyond what’s expected of us–and what we expect of ourselves.
This class has actually been something I never anticipated it being. It’s been consciousness-raising. (And I already considered myself a feminist). Oh, how I would like to push my children’s gender boundaries just a little bit more, how I would like for all of them to share those best qualities that shouldn’t be gendered at all. Kindness, gentleness, empathy, grace, ambition. To be thoughtful, hardworking, confident, open. To lead, to share, to cooperate, to give. To be creative, active, brave. Never to fear judgement. To develop job skills and domestic skills, and to be loving caregivers.
Imagine.

I Don't Want a Blow-Drier
How Does She Do It?