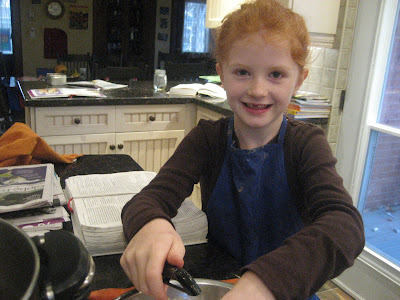 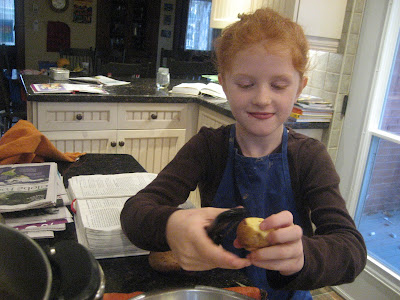 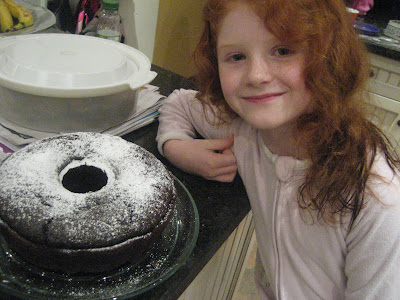 I wasn’t sure we were up for it. But it was on the calendar: AppleApple’s turn to make supper. We’d scheduled it for yesterday, on Sunday, because Kevin was away and working from Thursday night through Saturday evening, and this cooking experiment requires a second parent on hand to entertain those children whose turn it is not. We started with bread dough in the morning. AppleApple agreed to help. Truthfully, I was so lethargic and unfocused after that time alone with the kids, I wouldn’t have managed to bake bread otherwise–and that’s my new weekend goal: bake bread and bake cookies.
AppleApple is amazing at bread-baking. Has all kinds of opinions about what extras we should add in to make this batch different than the last one. When I told her that some people wouldn’t believe that a seven-year-old could bake bread that looks and tastes like her bread, she was flabbergasted. It seems so easy. Measure, mix, knead. (With help from mama). This bread has rye flakes, and sunflower and flax seeds. It rose up beautifully, and we made four loaves for the week.
While the bread was rising, I took Albus shopping for winter boots. We had to drive around a bit, and he ended up, at the second store, deciding that the only boot in the store that was in his size would do (seriously! And the first store had precisely zero boots in his size). We were home in time for me to deliver Fooey to her first friend birthday party, which had her thrilled with excitement for days leading up to the big event. While she was out, I baked piles of oatmeal choc chip cookies. Kev went to pick up Fooey with Albus and CJ, and Fooey ran through our front door shouting that her little friend “has a daddy! And he’s really nice!” I got all the details at bedtime: musical chairs, a treasure hunt, what her friend’s basement playroom looked like, and on and on. She has no difficulty separating from us and doing her own thing.
AppleApple and I started on our cooking around 3pm, and worked till almost 6. I finished the cookie-baking while she started prepping ingredients. She chose a seasonal menu that did not require us to leave the house to find ingredients. She used the Simply In Season Children’s Cookbook. On the menu: Tater Soup, Granny Apple Rice, and Secret Chocolate Cake. “Tatter soup,” was how she pronounced it. That required scraping and cleaning nine smallish potatoes and four large carrots (we doubled the recipe). I appreciated how straightforward she was about her desire and ability to do certain tasks: for example, she told me that she didn’t feel confident chopping some of the vegetables. She worked very hard. She scrapped and cleaned two large beets for the secret chocolate cake. She peeled four apples for the rice. It was all very labour-intensive, but I noticed something: I didn’t mind using extra pots and pans and kitchen implements with someone else around to appreciate and enjoy the labours, and I didn’t feel impatient at all.
Which I note because I’d felt very impatient when I was in the vehicle running errands that morning (not with Albus, mind you, but with the situation of sitting in the vehicle, waiting at stoplights, having to drive across town, etc.).
But as we worked together, and talked and planned, and measured and made decisions, it felt like we had all the time in the world at our disposal.
The meal was delicious. The soup was creamy and smooth. The rice was sweet and savoury. The bread was tall and chewy. The dessert was decadent.
Next up: Fooey. It will be interesting to see what my four-year-old brings to the table (literally as well as metaphorically). She says she’s already got her menu planned. I wonder whether it will resemble her favourite outfits, when she picks out her clothes in the morning: a skirt, a dress, a shirt, a, sweater, tights, and socks.

Solo Outings
Put It All Together, and Here's What You've Got