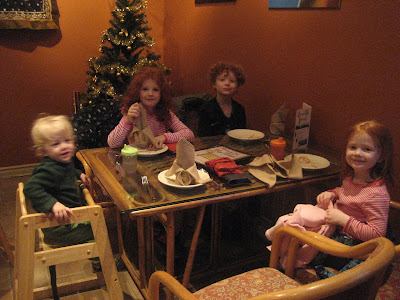 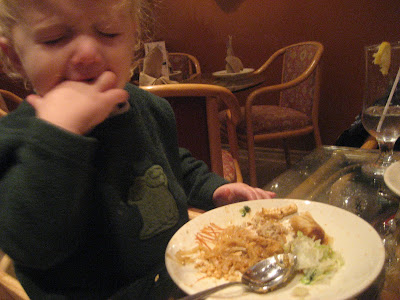 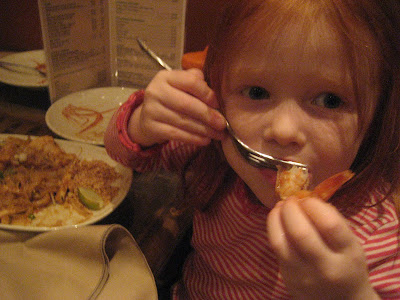 And by solo, I mean one parent with four children. Pictured above is last night’s highly successful outing, wherein I silently basked in my children’s fine behavior. I didn’t put much thought into the outing, which was probably a good thing, because too much thinking and I might have thought better of it. We brainstormed places to go for supper, and agreed on a Thai restaurant within walking distance, as we had no vehicle at our disposal (Kevin is away for a few days; and this is what happens when you decide to be a one-vehicle family). Every kid chose a small entertainment item, I threw the diaper bag into the small stroller, and we headed merrily on our way. Since we arrived before 5pm on a Friday evening, we had the place to ourselves, and food arrived quickly (we are familiar with the menu and had made our meal choices beforehand). CJ is the real wild-card, but everyone was equally hungry, and we ate and talked and CJ pointed out animals in the artwork, including making loud dragon noises for the Chinese dragon (“why is a Chinese dragon at a Thai restaurant?” the older kids wondered). The photo above pictures him choking on a piece of Albus’s chicken. Awesome camera-work, Perfect Mom! Yes, he survived. We stopped at mains (no ice cream), and left the restaurant while everyone was still in happy spirits. I was one proud mama, and even got to hear an elderly woman who’d just arrived with her friends observe in an admiring voice: “Look at that woman, out all on her own with four children!”
:::
Then, today happened. I was tired. CJ woke four times last night, and though he agreed each time to go back to sleep without nursing, nevertheless that was four times I was up, giving him a hug and a kiss (“kiss, kiss,” he requested each time) and tucking him back in. Thankfully, we all slept in till 7:30. Then we hurried through breakfast, starting a crockpot supper, and organizing to go to a previously arranged dr’s appointment for Apple-Apple. By bus. Since we have no vehicle, as mentioned. You know, I just didn’t feel up to the task. Everyone else seemed grumpy, too, and didn’t appreciate being rushed on a Saturday morning. I tried phoning Kevin for commiseration, which resulted in a farcical game of phone tag. And did not help. There was a small meltdown. Mine. But. We made it to the bus stop, climbed aboard, stroller and all, made it to the dr’s office, all in good time. It was an up-and-down morning, I guess, now that I reflect on it. I was proud of the kids on the first bus ride, and in the dr’s office. We then headed to the Children’s Museum, and I was proud of them there, too. Mostly. But there were some definite rotten mothering moments. Such as when I texted Kevin while letting CJ glue and marker himself unattended at a craft station. And lunch was hairy. Though perhaps it was just exuberant and I’m being too hard on myself (and them). Lunch was followed by an entertaining session in the bathroom with CJ and a poopy diaper, while I left the other children unattended in the main room. I could hear Albus shouting directions all the way to the bathroom. When we finally emerged, CJ ran for the play area, climbed onto a wooden box and promptly fell off. I picked him up, howling, only to realize that my other children were being watched with some disapproval by parents in the snack-area. My unattended exuberent offspring were standing on top of another tall wooden box building a stool out of giant blocks of squishy Lego in order to climb up and make their CN-tower-sized structure even bigger. And then they crashed it down.
We could have gone home then, but we didn’t. We stayed till Santa arrived, whereupon AppleApple kept asking, in a loud voice, “Why would anyone want to sit on an old man’s lap who is wearing a fake beard and pretending to be Santa Claus?”
And then we left.

How Does She Do It?
Sunday Cooking Experiment with Eldest Daughter