Cooking Experiment with Four-Year-Old: A Further Episode in an Ongoing Series 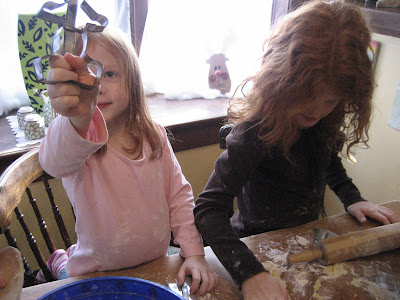 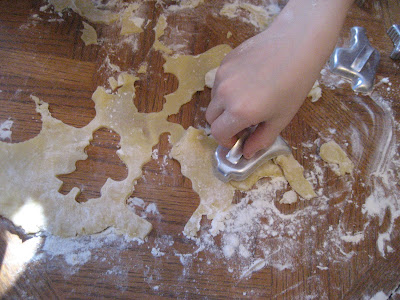 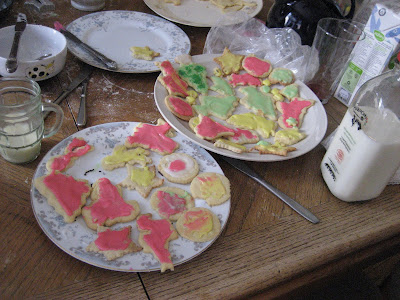 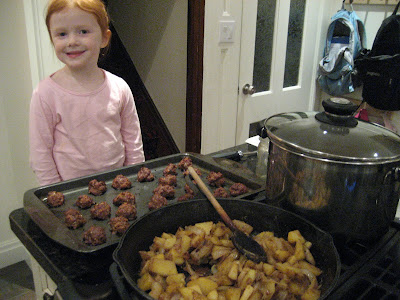 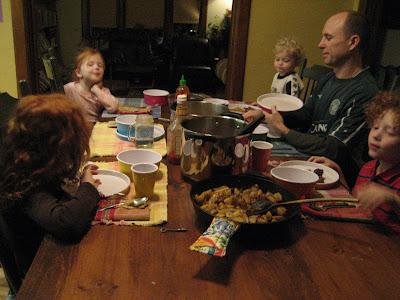 Winter wish list: check! We are all be-mittened and be-hatted thanks to Kevin heading out solo yesterday morning to do his capitalist duty in this season of exuberant consumerism, while I hauled the children to my mom’s where she tossed together a delicious lunch of sloppy joes on very short notice. We arrived in time for Fooey to help stir the sugar cookie dough, a good start to her day of cooking; actually, perhaps her best moment. CJ participated by eating dough off the wooden spoon, while everyone else gleefully cut out shapes, then iced the baked results, and ate them on the spot.
We arrived home with a sleeping toddler, several bags of cookies, and no house keys because I was wearing my weekend pants, and weekend pants have no pockets for keys. Of course. Lucky for us, Kevin had blown through an errand list the length of his arm and was on his last stop, nearby in uptown.
Late afternoon, and it was Fooey’s turn to cook supper with Mama. Her menu: chicken noodle soup, with extra noodles on the side. And meatballs. And fried potatoes. And beans and rice. And pumpkin muffins except baked as cake. And. Whoa, whoa, whoa, stop!
In retrospect, I made several tactical errors, most critically when I failed to account for the fact that cooking with an enthusiastic four-year-old would not be the same as cooking with her older brother and sister. Who, first off, can both read. Literacy is a real help to these cooking projects. It helps with the menu planning. Reading the cookbooks. Figuring out, independently, whether ingredients are on hand. Reading the recipes out loud during the cooking process. Finding measuring spoons and cups and reading amounts, and measuring them accurately. Second of all, four-year-olds can’t use sharp knives. They might think that they can, but they can’t. Don’t let them. Thirdly, and most crucially, four-year-olds lack endurance. Excitement meets reality and wanes sharply. I knew we were in trouble when she complained–first task of the afternoon–that washing the potatoes was “really hard, Mommy.” Crumbling a quarter slice of bread into crumbs rendered her weary beyond expression. Fetching ketchup from the fridge: “I have all these things I have to keep doing!” Squishing the hamburger into meatballs and placing them on the cookie sheet was perhaps the most successful of our cooperative ventures, but even this carried certain pitfalls. “Um, did you just lick your fingers?” “No.” “Let’s not lick raw hamburger from our fingers, okay, please?” (Yup, error number four: four-year-old handling raw meat.)
Next time, I’m thinking we’ll retool the four-year-old’s cooking date. I might direct the menu just a tad more (I did nix the beans and rice, and the pumpkin muffin-cake; still, we ended up with a genuinely eccentric selection of edibles upon the tabletop. Poultry, beef, and pork, if you count the bacon fat in which the potatoes were fried).
Next time, I will lower my expectations a great deal.
Still, she was proud of the end results (I think; mostly, anyway), with the meatballs coming in as her favourite. I’m hoping the ongoing experiment will broaden her palette ever so slightly, as she’s currently our pickiest eater. And stubborn as heck. And taken to screeching in disgust at the sight of any objectionable new dish. The good news is that this role used to be filled by AppleApple, who is now willing to try anything. I live in hope.
:::
If this weren’t already a veritable epic, and if my children were not becoming restless and desperate for attention, I might add something about last night’s fabulous debauch at our friends’ third annual Hi-Fi Christmas bash … something other than the cryptic words whiskey sour, dance fever, barefoot, cognac … forget it, those aren’t cryptic in the least. I’m already looking forward to next year. We’ll ship the kids somewhere for the whole weekend, and dance till they kick us out.