Update, on a Rain-Spattered Day 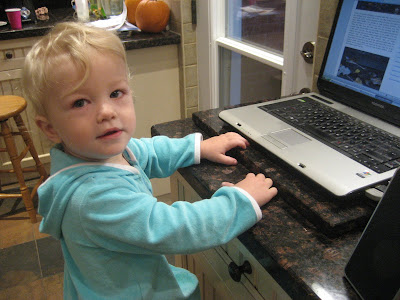 An update seems in order.
Yes, my midterm went well. Apparently my mama-brain still retains and regurgitates factual information upon request. I realized it had been a really really really impressively long time since I’d written an exam; in grad school, we had to endure nerve-wracking seminar presentations instead. All said, it was doable. Best of all, my cold vapours seemed to lift as I entered the classroom, and by the time Kevin had picked me up and driven us across town to the Art Bar, I felt very nearly in the pink of health. It had been a really really really long time since I’d read, too. Though initially nervous, and somewhat dry of mouth, I reminded myself (as ever) to enjoy the moment, and take confidence in the words. The words will lead you home. Or something like that. Tough crowd, reading to a roomful of friends.

I never remember to have photos taken at readings, which is why CJ appears above, not me. He loves to climb a stool and hack away at the computer keyboard, which is probably ill-advised for its long-term health. Apple-Apple has also been spending great swathes of time at the upstairs computer, working on a Quidditch story. She has amazing focus and patience, and reminds me of myself, the way she can hole up inside her imaginary worlds and vanish. I perform vanishing acts regularly, much to the dismay of my family. It is maddening, I can see that. But there’s no other way to write something out. Writing takes me out of life; but it takes me deeper inside of it, too.
Alice Munro said a few things that struck me to the core: one, was that she doesn’t consider herself a very brave person, and though she might be a brave writer, it was very difficult to come back from that writing world and have to deal with the consequences of what she’d written. She admitted that she’d caused pain, not purposely, of course; and one could infer that it pained her greatly to have caused pain. That’s a part of the writing life people don’t much talk about. It’s damned true. She also said that outside of her daily chores, she really just writes. It’s all she does, all she wants to do. That gave me pause. Because it’s not all that I want to do. I have such a variety of interests, my energies run in different directions, and I love that part of myself that is physically engaged with the world; maybe I will not be a writer-writer after all. I’ll just be a happy dabbler in the great sea of literature. Just let it be that what I write is true. Both Alice Munro and Diana Athill spoke at some length about how the only thing that really matters, when writing, is to get at the heart of the matter, that in holding back, hesitating, being afraid, unwilling to go to the core, being anything other than totally honest … well, what you write will ring false. Which returns me to Alice Munro’s comment that she’s not a brave person: yes, she is. She’s been brave enough to write truthfully and unselfconsciously, and brave enough to publish it, no matter the consequences. I salute her. (And I can’t wait to read Diana Athill’s memoirs. I’m certain she’s a brave writer, too).
Where I'm At
Back to the Present