Hogwarts in Our Living-Room 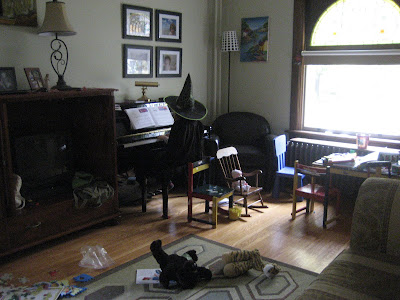 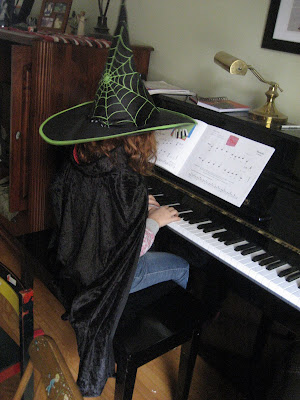 She’s on the fifth Harry Potter book, reading on her own; and she’s entered whole-self into that world. She ran through the door after school yesterday, clad herself in cape and hat (plus a plush duck that stands in for her owl, named “Tweet”), and began practicing the piano. I love that she’s not pretending to be Hermoine or Harry, she’s herself, Hogwarts student, wholly integrated into that magical world. Kevin and I have been replying to notes sent via her owl, rubber-banding messages onto the owl’s leg. The piano practice was spontaneous, which I must say happens rarely, though both kids were greatly more enthusiastic when I suggested they try writing their own songs. (Still, they need the practice to gain the skills to write songs; can I persuade them of this?) Albus’s made-up song had a catchy tune, with the words “Turkeys running everywhere-ere / and the sun is shi-i-i-ning / Turkeys running every which way / Turkeys running every which way.” Apple-Apple’s had a more complicated melody and made much use of the sustain pedal. If you’re around and would like a performance in person, just ask. As far as I can tell, all four children enjoy being on stage and performing for an audience. Hmm.
Joys of Obligation
aka Hockey Hair