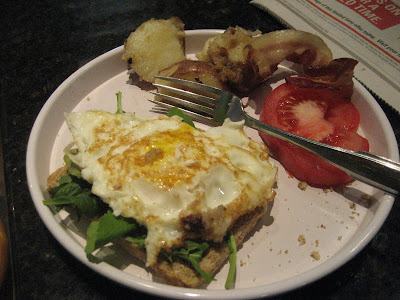 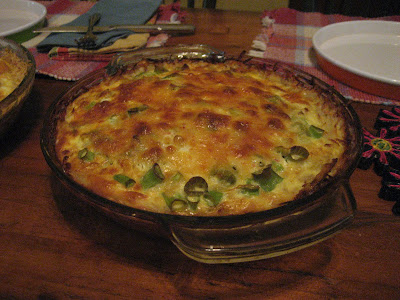 Fooey and I, lying side by side in a play tent in our living-room, talking (subjects: camping trips we’ve taken, going to the beach, marshmallows on graham crackers, etc.). “Do you know what we’re doing, Mommy? We’re having a chat!” The wonder and pleasure in her voice.
Does that plate at the top of the page make you hungry? Bacon, fried potatoes, open-faced egg sandwich on local greens, local tomato (must be hothouse). That entire meal is made from ingredients sourced at Nina’s buying club. Local, local, local, and good. I am using her club as my grocery store, though since we still like to eat apples and bananas and drink coffee, we have to visit the actual grocery store (or our neighbourhood health food store, Eating Well) for odds and ends. Buying club was last night and my fridge is stuffed.
If you have Simply in Season (cookbook), I highly recommend its spring quiche trio recipe. We made one with a crumb crust and one with a grated potato crust (pictured above); both very very good indeed, and filled with what seemed very little but became plenty: we filled the potato crust with uncooked chopped green onions and grated garlic cheese, and the crumb crust with leftover hamburger and sliced apples (don’t tell the kids; the apples were scavenged from their lunch boxes). Over top of each was poured three beaten eggs and one cup of milk. It was supposed to be evaporated milk, but we used regular. And, yes, the “we” is deliberate: these were made by group effort. It was that brutal witching hour after school, and CJ was short on his nap, everyone exhausted from too many late nights in a row (we’re heading toward the longest day of the year), the noise a pure cacophony of misery (here’s what it sounded like: http://www.youtube.com/watch?v=mi6ksjFSg-k) … yet food needed to be prepared. Why can’t I be like Soule Mama? I asked myself somewhat despairingly. There must be some way to involve these kids.
So I did. Albus cut the butter into the flour for the crumb crust and stuck it into the pie plate, and Fooey whisked the egg/milk mixture. CJ was not going to be cheered under any circumstance, however, though he stood in his high chair at the counter and with irritation and occasional screaming (whoo, this boy can scream) he pawed at and rejected the edibles I kept tossing at him. What he wanted was his Mama, and his favourite spot on the couch. Soule Mama, how do you do it? I would file this experience under Mixed Success … the older children were pleased to help, their moods greatly improved; but their participation only reminded the babe that he wasn’t being treated with equal respect. He thinks he’s their size, of course.
Yesterday, after buying club, he attempted to follow Apple-Apple’s lead at the little park. She easily steps off the play structure onto a ladder about a foot away; he was sure his legs were just as long. They weren’t. He would have walked confidently into thin air had I not been right behind him.
Moving On
Good Old Crumbs