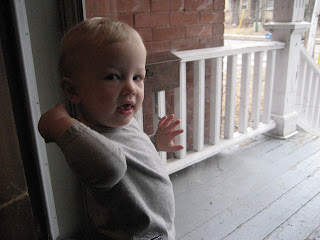 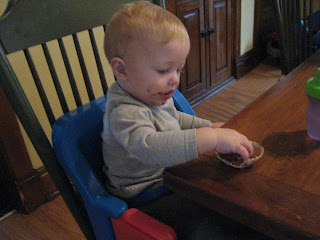 Son CJ will be a year on March 29. He can now enter a room, say, the kitchen, and open all cupboard doors not rubber-banded shut and empty them in a matter of seconds. Last night, while I did dishes, he layered the floor with baking trays and muffin tins, which made a most satisfying crash as they landed. He then got stuck head-first in the corner cupboard. Then he practiced opening and closing the heavy kitchen drawers and attempting to heave-ho the largest of the pasta pots. Nothing delights him more than to march about hoisting high an implement at least three times his height: brooms, hockey sticks, et cetera. He also loves to toot on a plastic recorder or bang a drum, and will stop mid-stride at the sound of a good dance beat to bop up and down. I’ve also just realized he is talking to us using actual words–“da do” for thank you, “na-na” for nurse and/or mama, head shake for “no,” “ma” for more, et cetera. He waves bye-bye, and last night climbed the stairs in the dark (guess he’s put aside his fear of heights) and ran into big brother Albus’s room to wave an enthusiastic and loving goodnight.

There are more photographs on the parallel photo blog, but above are a few. He’s been running to the front door to wave hello and goodbye, or to watch his big siblings playing outside in the cold. And two mornings ago, I let him eat (destroy) a muffin all by himself.
He still nurses several times a night, but he just fell alseep by himself for the First Time Ever. Naptime, and I laid him down, tucked him in, came down and read stories to Fooey. We kept listening for the enthusiastic screams of protest, but they never came. A little fussing, and then silence. He was fast asleep. My goal is to be able to kiss him goodnight and leave the room. I know it’s possible, because Albus was falling asleep contentedly by eight or nine months; though the girls were much later. Apple-Apple was twenty-six months, and Fooey was about twenty months. In fact, I couldn’t get Apple-Apple to sleep without pushing her in the stroller. After she was weaned, Kevin did bedtime, and when he was travelling for work, I would have to call a friend or grandma to sit in our quiet house, Albus fast asleep, while I pushed Apple-Apple round and round the block.

Ah memories. Can you tell I’m trying to distract myself from worrying about another subject entirely?

Update on The Knee: it’s shattered, according to x-rays, which explains why the swelling never subsided. My sweetheart is at the hospital as I type this, waiting to be assessed by an orthopedic surgeon. He hasn’t eaten all day in anticipation of possble surgery, and was looking a little wan. And in pain. He’s very stoical, however, and fundamentally optimistic, and I know he’ll be doing all that he can, and probably more than he should, as soon as the surgery’s over. But darn, I hate waiting, and not really knowing. Good thing the kids are having friends over after school, and I’ll be more than occupied from 3pm on with the purposeful basics: school pickup, snacks, cooking, supper, cleanup, bathtime, bed.
Time for a cup of tea.
Shinny Knee
Quick Update