We promised to hang up some decorations today, so the kids got themselves up and dressed and started cleaning the house before we’d crawled out of bed this morning. There was a lot to clean. Too much. So they ran out of steam. But I loved that they tried and that it was of their own inspiration.

The house got cleaned. I was on an efficient adrenalin rush, and it happened.

We put up the tree. You plug it in and it spins and glows fibre-optically. We had it in the attic, and the kids longed to use it rather than cutting down a real tree. So it’s kinda environmentally friendly, right? As long as we don’t turn it on. Then they took turns decorating it. It’s small and sits on a table, doesn’t fit a lot of decorations. There was fighting. So each, in turn, got to take the ornaments off and put them on again. Apple-Apple and I went out to do some gifty shopping (almost done!!!), and we finally bought a creche scene complete with rustic stable at Ten Thousand Villages, and we found a colourful unbreakable wooden 18-piece scene. I’ve been meaning to add this to our pretty minimal Christmas box. And how lovely that the kids can play with the scene and retell the story. Except they spent about 15 minutes screaming at each other over it as soon as Apple-Apple and I got home … SIGH. When I tried to initiate a conversation about the meaning of Christmas (“What is Christmas about …? Don’t worry there’s not a wrong answer …”), Apple-Apple remembered Jesus’s birthday (my little Sunday School darling!), and Albus piped up with “Getting gifts.” “What’s the opposite of that,” I asked, transparently leading the conversation, and he said, with a little sigh, “Giving gifts,” and then brightened up as he cleverly thought of another option, “Not getting gifts is the real opposite!” Okay, yah, you’re right, kiddo, but … Thus ended the chat, though I did get in a bit about sharing and kindness and peace and joy before Apple-Apple started shrieking again about how unfair Life is, et cetera. 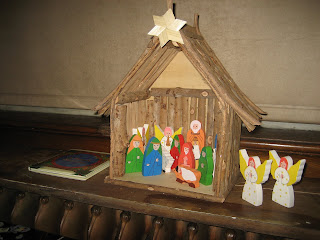